“I have given skill to all the skillful, so that they may make all that I have commanded you. “ Exodus 31:6

“O Thou who art the all pervading glory of the world, we bless Thee for the power of beauty to gladden our hearts.
We praise Thee that even the least of us may feel a thrill of the creative joy when we give form and substance to our thoughts and, beholding our handiwork, find it good and fair. “.
Walter Rauschenbusch

I've begun the hand-quilting on the Sixteen-Patch quilt, and I am enjoying these snatched hours of crafting pleasure.  I'm not worrying about the size of the stitches......this quilt is to ENJOY the process, and the product ! 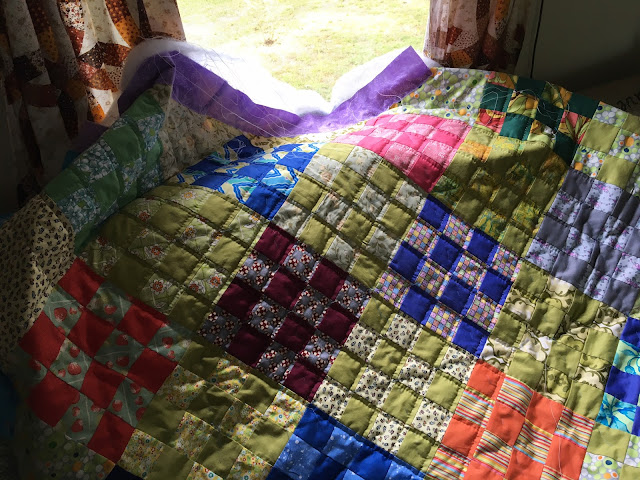 UPDATE:  Today at work, I received a "happy to help" pin, an acknowledgement of a job well done !

Our local county fair took place this past week, and they only brought back exhibitions last year, having cancelled them for many, many years.  So, last year I entered 2 quilts, just to get my foot in the door.  There were several entries, and I had hoped that it would pick up every year, with increased participation in the quilt area.

I never made it in time to see the exhibits this year, but from a picture that I saw on Facebook, it looked like there was even less participation this year than last.  With entry hours conflicting with my work hours, I thought that I would have to miss entering this year, but at the last moment, they allowed some morning entry, so I got up there in time to enter my string quilt on that last day's opportunity.

I had no idea if I won anything.  I went to pick up my quilt yesterday, and I was too late.  The lady had taken it home with her.  So I went to her office to pick it up this morning, and she had accidentally slept late for the FIRST time in many, MANY years !   I was beginning to wonder when I would see my quilt again, but was told that she would bring it to my house this morning before I had to leave for work. 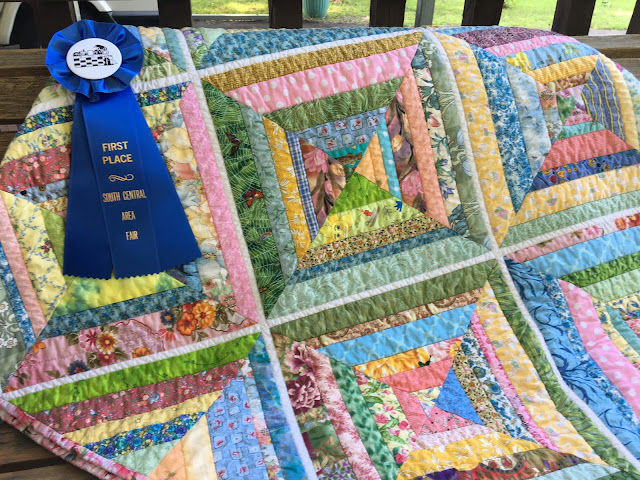 When she brought it over, it had this nice, BIG, BLUE ribbon on it, and I was a happy camper.  Big competition or little, those ribbons get me everytime. 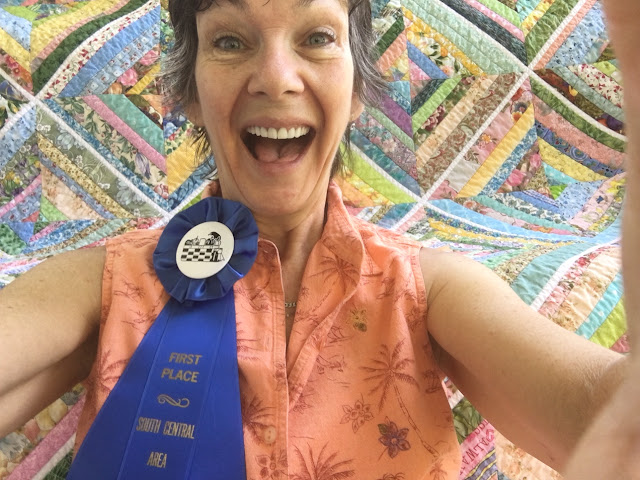 In other news, I showed Jodie Ann (my bff that calls the quilt ugly) a picture of the quilt in the basting frame, 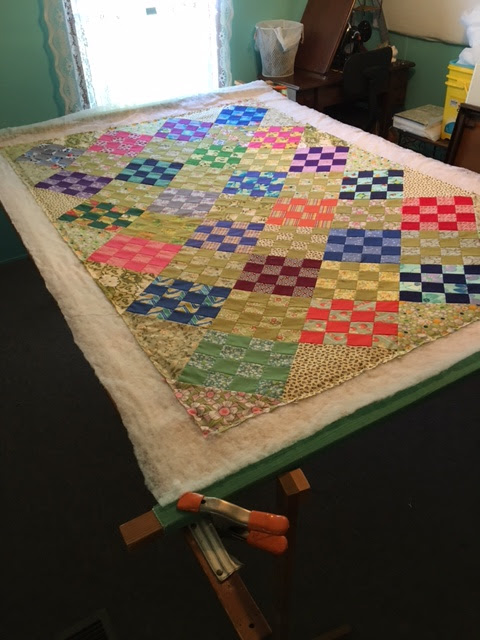 along with a picture of the backing that I pieced, .......(she's in the hospital with pneumonia again, and started showing everyone the pictures)...........and she texts me that her husband wants me to NAME MY PRICE so that he can BUY IT !    That has got to be the funniest news I've heard all week !

The HARDEST news I've gotten was just tonight.  My brother-in-law called to let me know that my sister has been diagnosed with a Pancreatic Tumor that contains cancerous cells.  They just got that information, and have to follow-up to find out more.  She was already suffering terribly from Spinal Stenosis, and, so, is in great need of prayer.  She's way out in California, and I'm here in Tennessee, so I can't be help to her physically, but I'll pray for her, and thank you for doing the same for Mary Honaker.
Posted by Dolly at 11:51 PM 3 comments:

Today was my day off, and I decided right out of bed that today was the day that I RE-ENTERED my sewing room !

Woo hoo !   I got an idea for making a backing for the sixteen-patch top, and went right to work on it.  I had already put together enough extra blocks to widen a 42-inch piece of fabric so that it would be wide enough to extend a couple of inches past the top on all sides.  This 'ugly' fabric was my beginning inspiration when I first went through the box of fabrics that JoAnn sent to me. 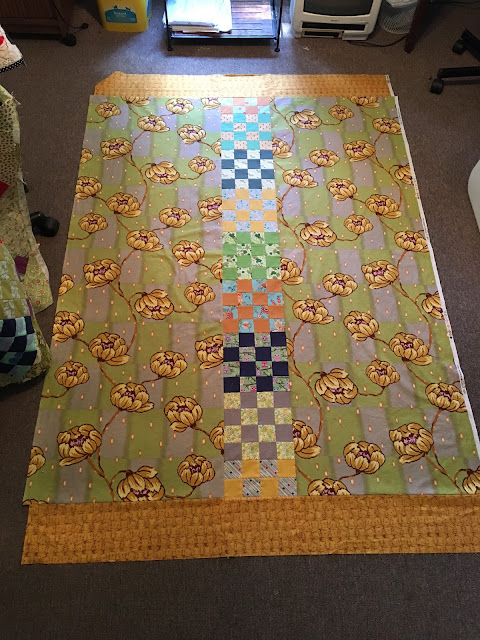 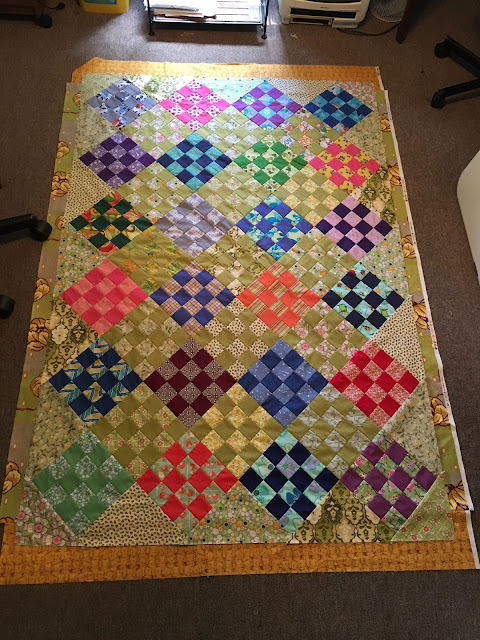 Blessedly, I also found, in that box, a gold-colored fabric that would work (it's only going to show for a couple of inches at the top and bottom of the back of the quilt), so, it didn't take me long to cut and piece it all together.

I spent the remainder of the afternoon getting a haircut (DON'T ASK !!!!!!!!!), and getting the backyard mowed.  After that, I was ready for ANOTHER shower and some recliner/t.v time.
Posted by Dolly at 10:19 PM 1 comment:

Labels: backing for 16-patch quilt-top, haircut that was supposed to just be a trim

A strange thing is happening at work.  A couple of days ago, AFTER I had been there for a while, and sometime between 3:30 and 4:30 p.m., someone went through and threw packages of toilet paper around and made a mess, damaging some of the packages.  I asked then if there were cameras on every aisle, and my supervisor said, "no", and I mentioned what had happened.

Today, it escalated.  I worked on that aisle soon after getting to work, and all was fine.  Then a couple of hours or so later, when I went to stock that aisle, I found the craziest disarray of paper products.  At first, it looked almost comical, and one of my assistant managers was on the aisle, so I commented about it and showed her, and she said it was probably customers that did it.

But, the farther I went, trying to straighten the aisle, the more complicated the disarray showed itself to be.  They had gone through 3 entire sections, moving them up and down the aisle, neatly but wrongly displaying the products.  It was obvious to me that it was not a quick joke, but must have taken 20 minutes or more, and NOT by a child, either.

I don't know if someone just enjoys this crazy joke, or if it is someone who is hoping to slow me down so that I am reprimanded by my superiors when I am not as productive as I should be because of having to take time to correct things.  I mentioned it to my supervisor later, and he again thought that it was just a customer.  I wish I had taken pictures with my phone, but then I probably would have gotten in trouble, because you're not supposed to be on your phone during working hours.

I've prayed about it, and am hoping that it ceases.  I like my job and I try to get along with everyone.  I'd hate to see it spoiled by something ridiculous like this.
Posted by Dolly at 12:05 AM 1 comment:

I have now been working at Walmart for over 3 months.  This past week I completed the Pathways video training program and received my first raise.  I have to give praise to God for the resilience to do this job, and, hopefully, to do it to the satisfaction of my supervisors and managers.  I like the work, and it has been a God-send in keeping me too busy to focus on James' passing and the life changes that it brought about.

It does feel good to receive that paycheck and know that I am able to keep the bills paid on by own, by the grace of God.

I don't spend much time in my sewing room.  I guess I have time in my mornings, but have been so spoiled in being able to work on a project until it was completed quickly, that I just haven't adapted to sneaking in an hour here and there. 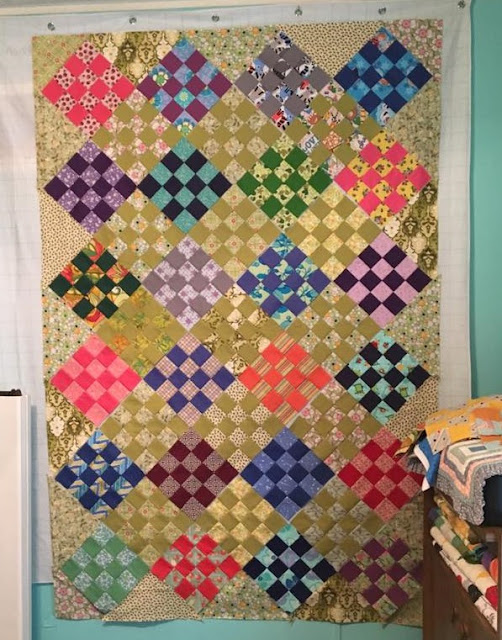 After completing the sixteen-patch top, I purchased a polyester batt to use in it.  I just wanted to get a light, fluffy quilt for Summer, but I'm afraid that time is getting away from me and it will become a Fall/Winter quilt if I finally get around to it soon.  I need to get it basted while I can still do that outside on the carport, but I haven't been successful in coming up with a backing that pleases me.  My girlfriend that provided most of the fabrics has already deemed the quilt UGLY, but I think it will be quite 'interesting' and pleasing to me when it is finished.  My tastes have always run contrary to popular likes.
Honestly, though, it does remind me of the kind of quilt that you find well-used, sticking out of a doghouse, or under a vehicle that is undergoing repair of some kind.   HA !

I still battle to keep the lawn mowed, only using my Friday's off, generally, to get it done.  My garden produced plenty of nice-sized tomatoes.  In fact, it produced more than I got around to using or giving away, and sadly, I have had to throw a few away that got over-ripe waiting for me to eat them.
I have only had one Moonflower bloom this year, and I surprisingly found it in bloom when I rounded the yard with the jeep this morning, heading for Church. 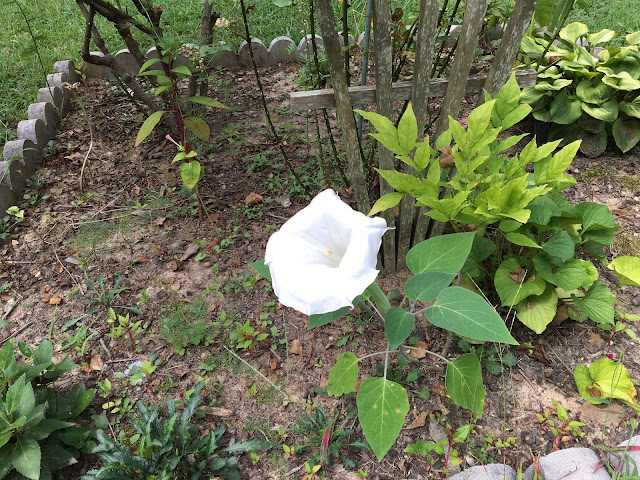 My cucmbers, only two hills, grew well enough for me to make up about six or so little jars of refrigerator pickles.  After that, I think that I damaged them while mowing inside the garden fence, because the ones growing since them have not been as good, some even turning yellow while still small.  But, boy oh boy, do those sweet  pickles go well with supper !

My husband of forty years. 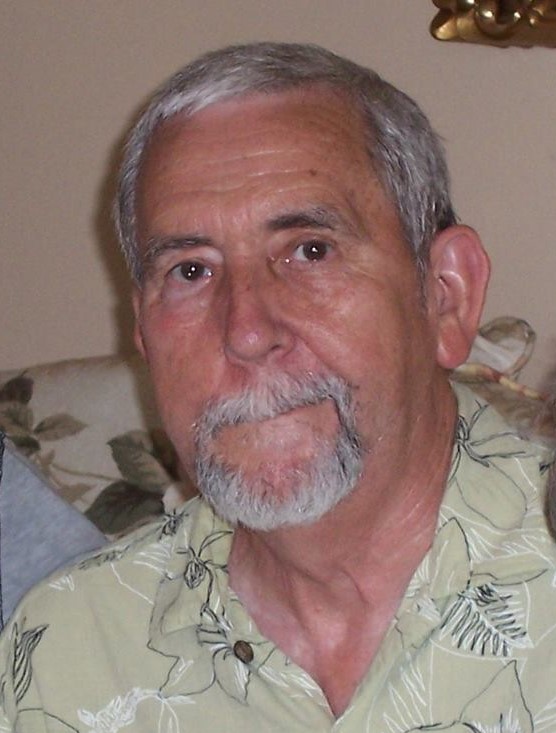 The generous soul will be made rich, and he who waters will also be watered himself. Proverbs 11:25

Loves of my heart 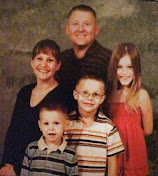 This is from a few years ago.

My beautiful daughter and my son-in-love 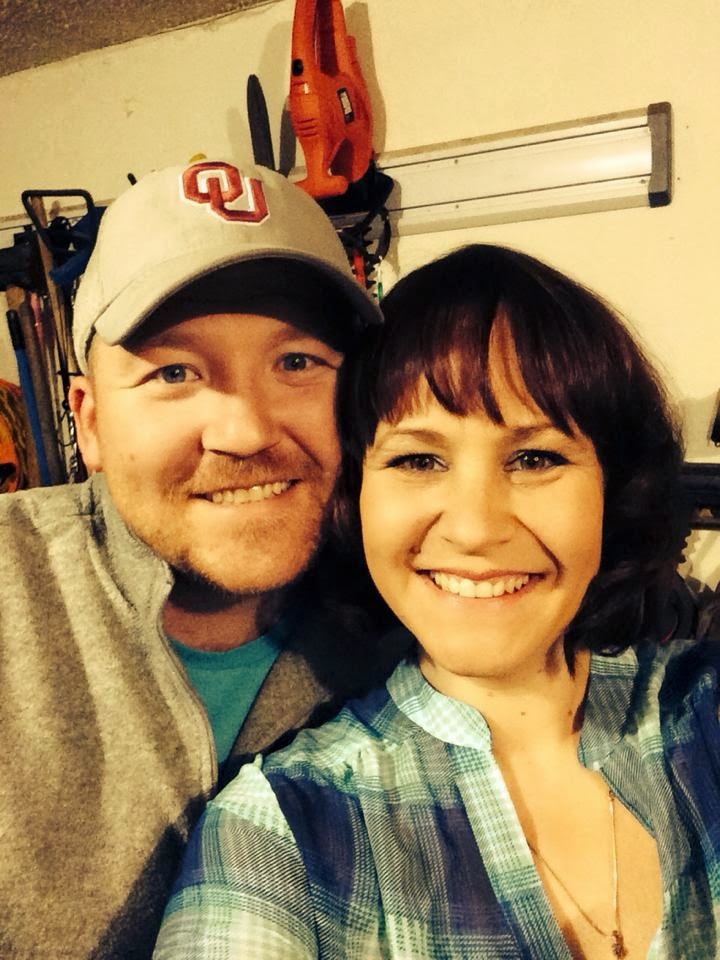 May God bless their home !

Me and the hubby 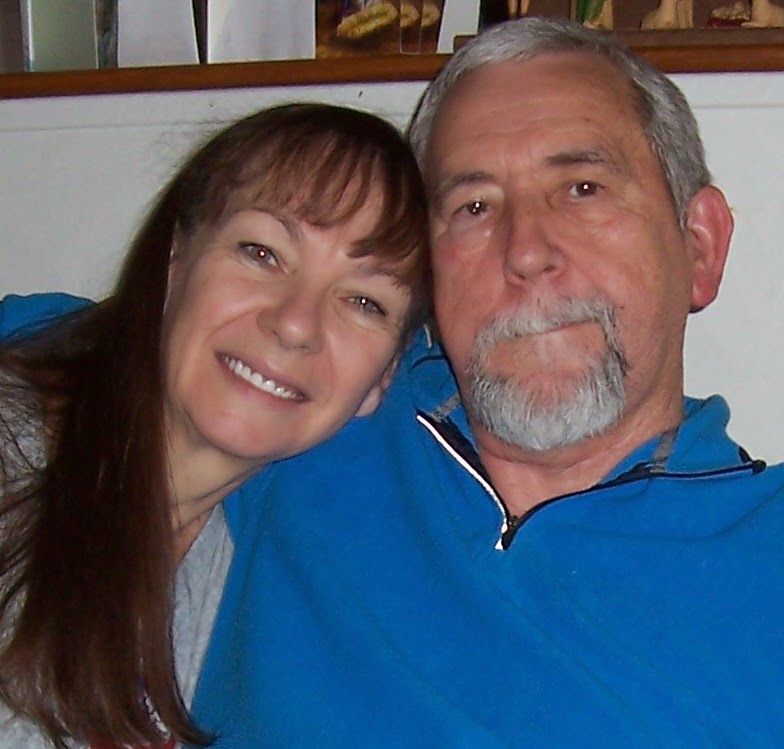 Blessed to be together 39 years

She makes all my quilts !

A quilting journal, somewhat, and points of daily life

Get this widget at roytanck.com


Please click on the photo for more pictures of this quilt.

Two Sides to Every Story 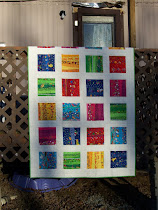 Click on this photo for more about this quilt.